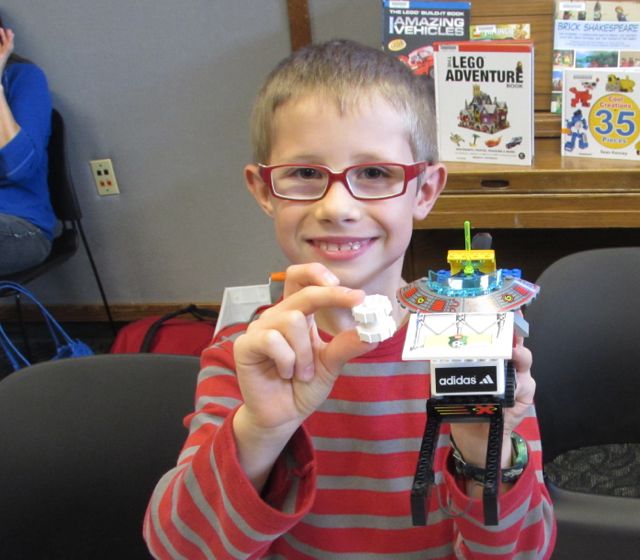 My eight-year-old son, if stranded on the proverbial desert island, by his own admission would need only two things to survive the ordeal: LEGOs and books. So when his two favorite things collide at the Olympia Timberland Library’s monthly LEGO Challenge, he is blissfully happy.

The LEGO Challenge is the brainchild of Olympia librarian Mary Rulewicz. Rulewicz and Amy Culp of Noel’s House of Bricks, the popular used LEGO shop in Olympia, began collaborating back in June 2014 to create an opportunity for kids between the ages of 7 – 12 to have moderately structured, creative play time with LEGOs at the library.

The library has now hosted three months of challenges and the fourth one will happen this week on January 7 and 8.

“Libraries are changing,” Rulewicz explained, “and the trend is moving toward seeing libraries as ‘maker spaces’ or places that people go to in order to create.” And the kids who participate in the twice a month LEGO challenges at the library are creating in earnest.

The first LEGO night each month is individual; librarian facilitators present a “challenge” such as create a playground or create a bridge and the kiddos go to work to complete the challenge on their own. The second day is a group challenge day where teams collaborate to complete the task. The tubs of LEGO bricks that children use to craft their amazing creations are donated from Noel’s House of Bricks. Because of limited space, children can either sign up for the individual challenge or the group challenge, but not both.

Amy Culp doesn’t just help sort and deliver the copious amounts of LEGOs it takes to make this event happen – she participates as well. All three of her children happen to fall in the target age group and they all love to take part in the LEGO Challenge at the library. “What we came away with after the first few events,” Culp offered, “is that the kids didn’t really need much structure. It was so fun to watch them take on the challenge and see their imaginations come to life. And they all worked really well together.”

The collaborative aspect of the challenges are something that the librarians capitalize on as well. After all the kids are done creating their masterpieces, the children all do a “gallery walk” around the room to observe what everyone has created. Each person, or team, has an opportunity to explain to the large group what their LEGO creation is all about and how it works. As any parent of a LEGO aficionado can tell you, this is an integral part of the LEGO creation process.

The next few LEGO Challenges at the Olympia library are going to be even bigger and better. After beginning the collaboration with Noel’s House of Bricks, Mary Rulewicz was reading through one of her library journals at home when she stumbled across an article about the LEGO Corporation wanting to partner with libraries in capital cities to donate LEGOs for programs just like the one she had created.

Rulewicz passed off the information to Ellen Duffy, the youth services coordinator for the twenty-seven branches of the Timberland Regional Library system and the rest is history. The kids who participated in last month’s challenge got a sneak peek at the new LEGOs that the library has received from LEGO Corporation, but the kids who come to this month’s challenge with actually get to build with the new pieces that have been donated to the Olympia Timberland Library.

So, if you have a boy or girl in your life who loves those LEGOs, be sure to sign them up for an upcoming LEGO Challenge at the library. Pre-registration is necessary because space at the Olympia library is limited. And the challenges have been filling up – almost to capacity – each month. Every participant walks away with a coupon for a free LEGO mini-figure from Noel’s House of Bricks and one lucky winner receives a ten dollar gift certificate for the store.

LEGO lovers take note, there are only three rules at the Olympia library’s LEGO Challenge: Don’t leave the room with any LEGOs, share, and have fun.

South Sound Dance Has 10 Reasons Why Everyone Should Dance