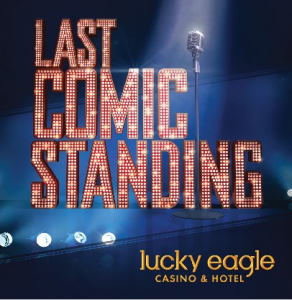 Autumn is upon us, the season of abundance and festivity.  What better way to celebrate than with the competitors—and winner—of NBC’s Last Comic Standing?  Mel Brooks, when not leaving 11-fingered handprints on the Hollywood Walk of Fame, wisely declared that “Life literally abounds in comedy if you just look around you.”  On Saturday, October 18 you won’t have to look further than Rochester’s Lucky Eagle Casino & Hotel.

With Season 9 filming now to air in May 2015, Last Comic Standing began with open casting calls more than a decade ago.  Their stages have been graced by such comedy legends as Gabriel Iglesias, Ralphie May, Kathleen Madigan, and Joel McHale.  The show uses experienced comedic judges as well, including Roseanne Barr, Drew Carey, Brett Butler, Keenen Ivory Wayans, Kathy Griffin, Garry Marshall, and Tim Meadows.

Marketing Manager Lindy Waring says, “The Lucky Eagle Casino and Hotel is really excited to have this nationally televised hit show in our Event Center.  We have not teamed up with a reality show before and it should be a big hit.  Tickets have been selling fast!”

Amongst the night’s performers are finalists Nikki Carr, Rocky LaPorte, Lachlan Patterson, and Joe Machi, as well as winner Rod Man.  On their season of the show, “comics had to participate in a variety of challenges that tested their improvisation, roasting and talk show guest skills.  Here, they received advice from comedians Cheryl Hines, Howie Mandel, Jeff Ross, Jay Leno and executive producer Wanda Sykes.  Ellen Degeneres hosted the talk show guest challenge on the set of her show, while Gilbert Gottfried was the target for the roast challenge.”  With those difficult performances under their belts, the evening is sure to be a laugh riot from start to finish.

Prices start at $30 for Players Club members and the event promises to sell out quickly.  Make a night of it and arrive early for dinner or a few hands, rounds, spins, pulls, or throws beforehand.  For an early autumn fling, book one of their many gorgeous rooms for a pre-holiday-madness staycation.

Season 8’s top 5 will be in town for one show only so don’t delay.  Tickets are on sale now at the Lucky Eagle Box Office, online, or by calling  Lucky Eagle Casino at 800-720-1788.  Nearly one thousand guests are expected for such an amazing evening of laughter and fun.

As one of only two Washington stops on their three month, nation-wide tour, don’t be the last one standing out in the cold when Last Comic Standing comes to town.  Before the holidays fill our calendars and drain our wallets, make time to laugh with the ones you love…it IS the best medicine, after all.