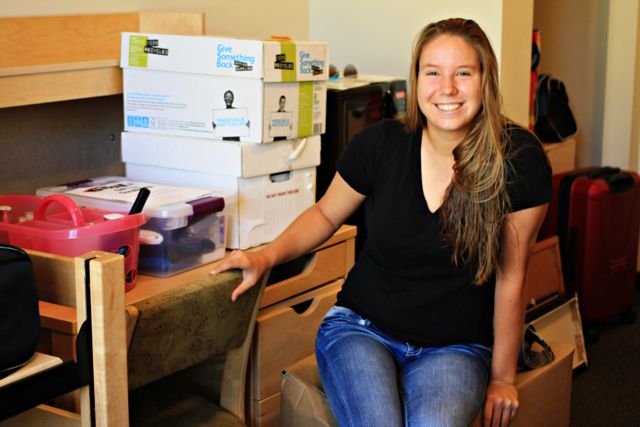 Incoming freshmen and their parents were warmly welcomed at the Saint Martin’s University Orientation by a magnitude of helpful students on August 22. The event was easy, and steady-going.

A family would drive up to the back doors of Parsons Hall, unload a few things, and let the orientation crew handle the rest. Like little worker bees, the crew strategically hustled bed sheets, luggage, and basic college essentials to the new students’ rooms. It was quick, yet almost graceful.

Freshman Taylor White was pleasantly startled by how easy the move-in process was.

“Saint Martin’s really helped a lot actually, I was surprised,” she said. “They came in and lofted my bed for me, they helped me move anything heavy, and I was done in about an hour.”

The swiftness of the orientation allowed Taylor to concentrate on having fun and meeting new people instead of troubling over her dorm set-up.

“This entire place is super fun and everyone is friendly,” she commented. “You can walk around campus and say ‘hi’ and someone will be like ‘oh, hey, what’s up?’ You don’t even need to know somebody’s name – you can just invite them to go hang out.”

Director of Campus Life Laurel Dube was an integral part of the move-in day. She coordinated with crew members, faculty, students, and parents simultaneously to ensure the process when smoothly.

“The ultimate goal for the parents during orientation is for them to feel at ease; that after 18 years with their children they are now stepping into a family that will take care of them, and will make sure that [the students] succeed,” Laurel said. “The ultimate goal for the students is that they make a lasting connection, either with a program that we’re doing or with one of the faculty or staff members, so that they know somebody is here for them, someone they can trust for the next four years.”

Laurel truly understands how difficult a transition into college can be for some. The objective of Saint Martin’s orientation crew was to make this transition as stress-free and enjoyable as possible.

“We move them into their rooms and they get a sort of crash course on what it’s like to be a Saint,” Laurel said. “It’s fun to see everything come into place and have so much happiness going on.”

Orientation crew member Hope Chamberlain showed up to the university a week early for training like many others did. She thoroughly enjoyed the experience.

“It’s a really great opportunity to meet all the new students as they come in, and let them know what a great place Saint Martin’s is,” Hope noted. “We got in anywhere from a couple weeks to even longer. A lot of students came in really early because we have different trainings going on. I’ve been here since August 15.”

Hope was excited to share about her work on the Nortia Floor in Parsons Hall with me.

“I’m a Nortia mentor,” she asserted. “Nortia is a leadership floor, so we take freshman who either have demonstrated leadership or want to really grow as leaders and get involved in the Saint Martin’s community. We live together and they are paired up with mentors who can help them find their place and establish themselves.”

As an outsider looking in, it was easy to see that leadership, establishment of the self, and a sense of community are all vital elements in the Saint Martin’s experience. Watching the ebb and flow of orientation day at the university was just a glimpse at the true initiative and resourcefulness students at Saint Martin’s are encouraged to have. ​