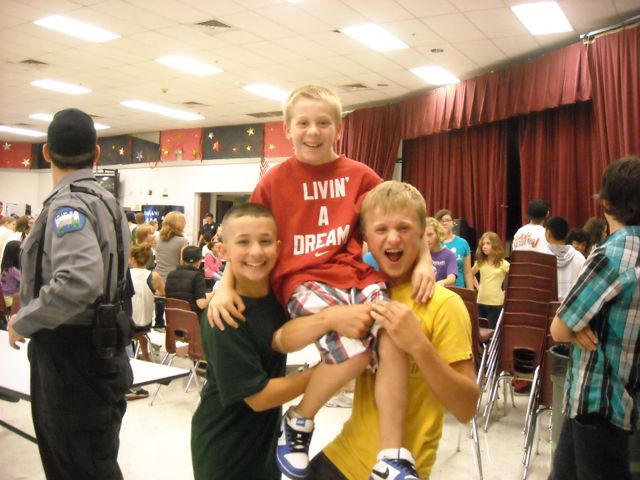 Lacey ACT Night has become a quintessential part of the middle school experience in North Thurston Public Schools. Seventh and eighth graders from around the district gather in one place to dance, play, and socialize.

“There are a lot of games,” exclaims North Thurston Public Schools seventh grader, Alexandra Trujillo. “There is a Velcro run where you get strapped in a suit and run with a bungee connected to you and it flings you back! It’s a lot of fun! It’s also fun to see new faces and friends from other schools.”

The Lacey Activities Coalition for Teens (Lacey ACT) has been putting together activities for North Thurston students since 1994. Most ACT Nights consist of a dance hosted by a DJ, inflatables, karaoke, basketball tournaments, elite mobile games, contests, and free snacks. Nearly 500 teens currently attend each event.

The idea for Lacey ACT Night came from a relationship between Lacey Parks & Recreation and North Thurston Public Schools. The overall goal of the event is to provide area youth with a safe, positive and fun environment for recreational sports, games, a place to listen to music and dance, and socialize with their friends.

All Lacey ACT Nights are funded through entry fees. “The program operates on admission revenue,” explains City of Lacey Recreation Supervisor, for Youth and Teen Activities, Kathy Owen. “Meaning, the revenue pays for facility rental, custodians, DJ, inflatables, video trailer, snacks, and part-time staff. The program is successful because of the adult volunteers and the assistance of the Lacey Teen Council. Without all the hours of donated service, the program could not operate.”

Volunteers are the key to the success of all Lacey ACT Nights. Last year, 43 adult and eleven teen volunteers helped at each event. The volunteers consist of parents, teachers, coaches, school board members, church groups, civic organizations, college students, and other community members. All volunteers are trained and have passed a background check.

With the addition of sixth graders to most North Thurston middle schools, parents and students are wondering if they will get to join in on the fun.

A solution to this issue is at the forefront of Lacey ACT’s event staff. “We will be offering sixth grade only events beginning next year,” says Owen. “Most middle schools will host one sixth grade event. The schedule has gone out to all three middle schools for acceptance and so far, the idea is being embraced.”

Living Healthier Together at the South Sound YMCA