Home History 90 Years of Theater History at The Washington Center

For 90 years, performers have graced the current site of The Washington Center for the Performing Arts in downtown Olympia. Since 1924, when the Liberty Theater opened on Washington Street, various types of entertainment have been available on that lot.

But, before theaters, the residence of the Thomas Reed family occupied the space, during an era when much of what we think of downtown Olympia wasn’t occupied by multi-story commercial buildings, but by historic single family homes. The Reed Block (in which Drees is currently located) was the house’s first neighbor in 1891. 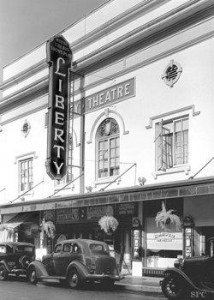 When the Liberty Theater joined a photography studio and the Reed Block in 1924, the makeup of Washington Street between 5th and Legion for the next several decades was largely complete. Brothers-in-law Mark Reed and George Ingham financed the movie house, which sat on the site of Reed’s childhood home.

Ed Echtle, in a yet unpublished essay on the history of the site, gives us a picture of what took place at the Liberty through the Great Depression:

“While feature films were the Liberty’s main offering, from early on, weekend matinees for children were a staple at the theater. Former Olympia Mayor Bill Jacobs recalled attending the Liberty as a child, to catch the weekly cartoon lineup billed as ‘Popeye Theater.’ While vaudeville performances were becoming less fashionable, live performances in the theater continued in diverse forms. One of the more unusual were the midnight ‘Spook Frolics’ presented by performers such as ‘Francisco’ who traveled the west coast in the 1930s and 40s.”

In the late 1940s, the new manager of the  Liberty Theater spent $75,000 to renovate the movie house and the Liberty became the Olympic Theater. Over thirty years, according to Echtle, the Olympic Theater tracked the slow decline of downtown with the expansion of commercial areas in Tumwater, Lacey and west Olympia.

In 1977 (at Capital Mall) and 1979 (on Martin Way), two new multiplexes opened. Multiplexes were newer multi-screen cinemas that could show more than one movie at a time. They began to spread across the country in the 1960s and became common in later decades. They also spelled doom for one screen operations like the Liberty.

Eventually, the site was caught up in the local movement to create a performing arts center. In 1979, the state legislature put up $1.5 million towards the Washington Center for the Performing Arts project, a proposed regional arts center. The local community eventually chipped in $1.2 million and the City of Olympia matched the state’s contribution of $1.5 million.

While at one point the organizers thought the old Olympic could be updated as an entertainment venue, the building was eventually gutted to make room for the Washington Center.

The new Washington Center opened in the fall of 1984 and has played a central role in the city’s cultural arts since then.

In recent years, the original 1980s construction started showing its age, requiring the city to step up and finance a $4.6 million reconstruction of the Washington Center’s exterior and some interior systems. The overhaul of the Washington Center began in the spring of 2013, wrapping up just a few months ago. The most notable change was the modernization from the stucco fronting of the building to a more contemporary stone and brick siding.

Tickets to upcoming performances are available at www.olytix.org.