As a stream of sweatsuit-wearing athletes coasted by with proud mothers sporting their letterman jackets, and parking already full, I joined the crowd with my camera bag and notepad at a bright and early 8:45 a.m. I wasn’t at the Tacoma Dome during the WIAA Mat Classic State Championship to cheer on my school – I was there to take an optimistic taste of my future career as a sports journalist.

My guide for the day was Tom Rohrer, ThurstonTalk.com’s trustworthy full-time sports writer, who told me up front that he’d been obsessed with sports his whole life and that “working with sports media had always been his goal.” I was prepared to be faced with a “yes sir” type of environment, as he led me to through to the media room, but much to my surprise, the fellow journalists I joined were delightfully informal.

I felt privileged to be issued a press pass, through ThurstonTalk, allowing me the same access as professional reporters, and was embarrassingly happy to sport the mandatory WIAA photographer’s vest that was three sizes too big. Once we set up camp for the day’s chaotic coverage, it was my job to be a sponge for media tips as well as to provide coverage for ThurstonTalk.

Tom started by discussing the agenda with me, and I had the sense of a rollercoaster’s ascent. He briefed me on everything from appropriate eye contact with interviewees, to appropriate fueling methods to prepare for ten hour days of coverage (coffee, not energy drinks), to proper etiquette in dealing with other journalists. The whole day followed in the same rapid-fire fashion, a lot to take in for a seventeen year-old.

Outside the media room, the stadium began to buzz as warm-ups were allowed and music fueled the atmosphere. Tom had already constructed amazingly organized schedules for mat numbers and times for our target wrestlers to watch. I madly scrawled the information down on my yellow legal pad, and what seemed like seconds later I was checking my shutter speed for appropriate sports photography.

I felt like I had a secret – I was only an intern – and was almost surprised that the security official let me onto the floor at the flash of my press pass. But I was there on equal ground with the other journalists, with the same 1000 mile-per-hour mindset. My first match to shoot featured a wrestler from Elma High School. All it took was a couple of snaps from my finger to click into what felt like a natural rhythm – shooting and scribbling notes.

Rounds and matches went by, and before I knew it, all of the quarterfinal matches were over. We uploaded hundreds of photos, fished out the best, and wrote cutlines to send to the editor. There was no time to refine, and I was reminded about how truly off-the-cuff journalism really is.

“The best thing to do is just reach out,” Tom told me in-between matches while he was writing, regarding a startup. “When you get your first job, it could be in a community as small as Tenino or as big as New York City. But reach out to the athletic contacts.” I made sure to scribble down gold nuggets like these all day to save for future reference.

And then it was time to find out which of our target wrestlers had qualified for finals, determined through pouring over an appalling amount of printed bracket sheets. I learned how to record and transcribe the intense interviews I received, and regurgitated all the facts surrounding the matches that I could absorb to throw into the articles.

The emotion and intensity was radiating from the wrestlers, the whirlwind of press and fans, coaches and cheerleaders from every compass direction; and it gave me a kick of adrenaline. The blood, the tears, (even the vomit) that I witnessed were a testament that no, this wasn’t a dream.  Yes, I was quite frankly having the chaotic time of my life. I saw wrestlers from Thurston and Grays Harbor Counties taking their fate in their own hands, and it reminded me that in a way I was too, through initiative, to peek into sports journalism.

It wasn’t the whiplash that I expected. Everyone always worries about their prospective careers, but I fell even more in love with journalism. I feel so privileged for the opportunity, and I know that a career in sports media is “write” for me.

I highly recommend job shadows or internship opportunities to anyone else in high school looking for a way to fulfill the culminating project requirements. It is a path created by you, geared to your own future, not an ambiguous option chosen by someone else. It is an amazing thing to be able to predict your own future, simply by trying out your talents.

To read an example of Libby’s work during the state wrestling championships, click here. 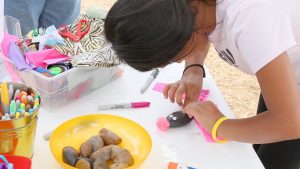 As school districts around Washington State are deciding how the coming year will unfold, parents are facing the reality that, for now at least,...