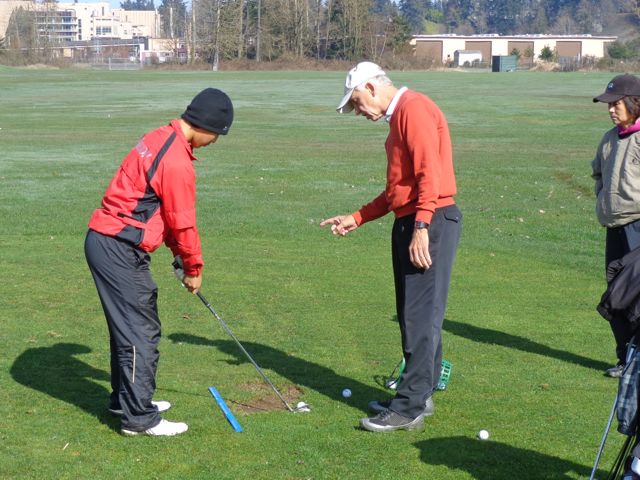 “Where am I at?” Thiel said, repeating the caller’s question.

It was a no-duh question. Naturally, he was at the golf course, teaching a student at the Tumwater Valley Golf Club. Where else would he be?

On this beautiful, sunny day, Thiel is at his office – a driving range. 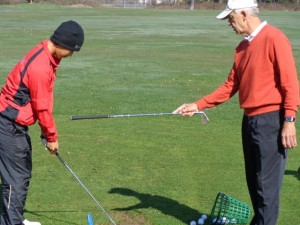 For 41 years, Thiel has been a swing doctor, teaching students from around the world. Considered one of the country’s best, he’s been named the PGA’s teacher of the year three times and Golf Magazine has included him in the country’s top 100 golf instructors list numerous times.

“I’ve always wanted to be a golf teacher,” Thiel said.

On this day, Thiel is giving a 90-minute check-up lesson to Hiroi Ukigaya, a 17-year-old from Japan with aspirations of turning pro. To pursue that dream, Ukigaya, while still a high school student, has left his family and moved to Olympia so he can take lessons from Thiel.

“He helps my game,” Ukigaya said. “He’s taught me a lot of things.”

Ukigaya first met Thiel three years ago, during one of his teaching visits to Japan. At least three times a year, Thiel flies to Asia and teaches in Japan, China, Thailand, Singapore, Vietnam and Malaysia, instructing players on the Japan and European pro golf tours.

Later this year, Thiel will be at the British Open to help Alex Wuashun smooth any wrinkles out of his game as he plays in that PGA tournament.

Thiel’s students past and present stretch from the PGA to the LPGA, from Texas Tech to Capital High School, from Seattle to Singapore. He’s taught some of Japan’s best, including LPGA players Won Han, Kang Soo Yun and Se Ri Pak. He admits his Japanese isn’t that great, but his understanding of the game is impeccable. 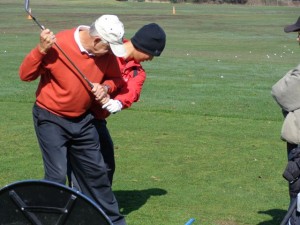 Shot after shot after shot, Ukigaya launches a golf ball and Thiel analyzes the technique, commenting on the positioning of the hands, speed of the club and the face of the club. It’s a swing under a microscope.

“Got to get a feel for that down swing,” Thiel said as Ukigaya launches another iron shot, the white ball slicing the blue sky.

Besides his worldwide tours, Thiel stays busy locally, hosting classes at the Tumwater Valley Golf Club when he is in town. He spent the last two months in Palm Desert, Calif., teaching students from across the country and around the world who fly there for sessions.

“I’m trying to slow down as fast as I can, but it doesn’t seem to happen,” said Thiel, who recently turned 65 but has the spunk and get-up of a kid. “But really all I care about is having an opportunity to make a difference in some of these people’s lives, using golf as my platform.”

For Thiel, it’s not just about the back swings. It’s about life’s approach.

“I use this fantastic game of golf, whatever God has given me,” Thiel said. “I use that as a means and an opportunity to influence people in many different directions in their lives and impact them.”

He sees himself as one piece of the puzzle. Working with the parents, grandparents and of course the student, he says it’s a group effort. He also asks that the students have a passion for the game. 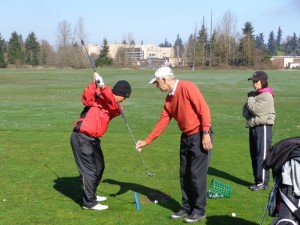 “Joe isn’t the kind of golf instructor who wants to put Band-Aids on your game,” said Michael Putnam, a PGA golfer from Tacoma who took lessons from Thiel. “He’ll change your game so you can play well the rest of your life.”

After graduating from business school, Thiel got his start as a golf instructor in 1971 when he landed his first job working at two public golf courses in Denver. After stops in Florida and Seattle, where he managed three courses, he moved to Olympia and bought the Capital City Golf Course in 1987 and sold it five years later.  He then built a three-hole practice course with a driving range which began as Eagle Quest. In 2003, Thiel partnered with Kevin Bishop to start The First Tee, a golf instruction school for kids. Several years ago, they sold that course and Thiel is teaching full time.

But Thiel isn’t just a swing doctor. He’s also a motivator who prods by challenging. His cell phone is like a psychiatrist’s couch. On a weekly basis, he analyzes the mental game of players like Putnam.

“For 30 seconds he tells you how good you’re doing, then he’ll kick your butt for the next 30 minutes,” Putnam said.

Thiel’s not about false praise, pumping up a student’s ego with “you’re looking great” when there is room for improvement.

“He doesn’t just tell you things you want to hear,” Putnam said. 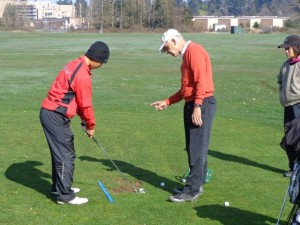 With Thiel’s love for the game of golf, it shouldn’t come as too big of a surprise that he met the love of his life, his wife, Susie, on a golf course. Before they were married and as Thiel was getting ready to move from his apartment, Susie visited and saw a pile of trophies and awards he had won in golf tournaments.

“She asked me what I was going to do with that?” Thiel said with a smile. “Well, I told her we could put them in a room in our new place.”

Susie responded, “We can put a plaque up and say this is Joe’s trophy room.”

Thiel wisely picked up on the sarcasm and got rid of the trophies. And he’s been living his dream ever since, helping others collect trophies along the way.