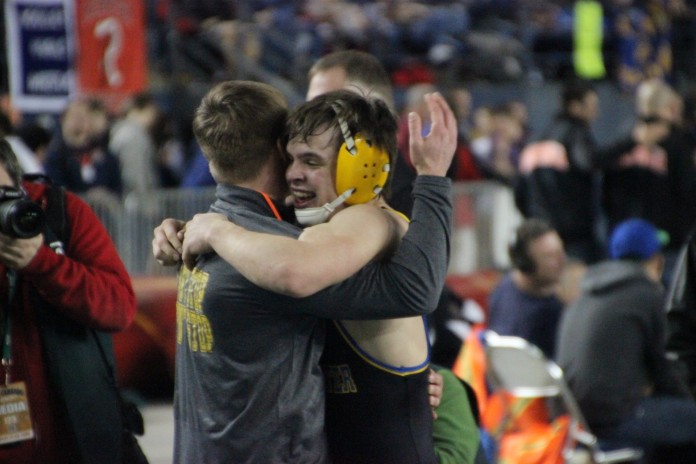 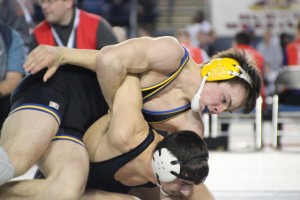 First comes occurrence, followed by a trend and finally a tradition.

A tradition of wrestling excellence within the Eastman family continued Saturday night, as Rochester’s Lucas Eastman became the third brother to win a 1A state championship.

Facing Omak’s Alex Aguilar in the 1A 155 lbs. championship match, Eastman dominated after falling behind 2-0 during the  infant stages of the match, winning with a final tally of 10-3.

Coached by his older brother and two time state champion, Justin, Eastman became the first Rochester wrestler to bring home a state crown since his older brother, Zach, accomplished the feat in 2010.

After the final bell rang at the match, a look of joy spread across the two brothers faces, eventually leading to a passionate hug that was years in the making. 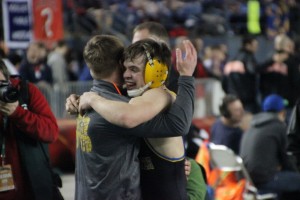 “It’s like full circle right now,” said Justin Eastman.  “He needed to get the title to make it complete and he did.  Nobody deserves this more than Lucas.”

Lucas had unfinished business to attend to in the Tacoma Dome, as he was defeated in the 145 lbs. championship by Robert Orozco 9-4 in overtime last March.

“I came into this year ready to push it to the next level,” said Lucas Eastman.  “This has been my dream my entire life and it’s even better than I imagined.”

Big brother was impressed with Lucas’ dominating performance that extended throughout the entire tournament.

“He was as dominant as any wrestler out here,” said Justin Eastman.  “His level of competiveness was at an all-time high.”

Eastman, a junior, already has his eyes set on next year.

“This is…really the beginning,” Lucas said. “Obviously I’m excited and will celebrate, but I will never stop working.  I’m going to bring it even more.”