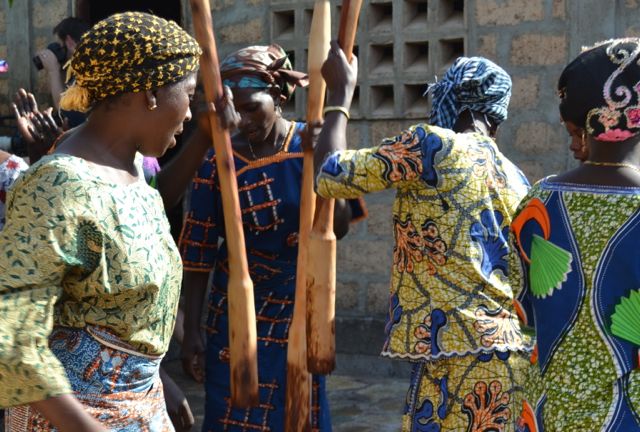 Factories are sterile, impersonal places. The only people around are the ones who operate the machines. The machines are sleek and intimidating. The noise is deafening and the color drained.  Definitely, not a place you’d expect to find a full size basketball court.

Yet, that’s one of the first things I see when I enter the factory at Alaffia. I don a hairnet and follow Ian McGregor, Communications Coordinator for the Tumwater based body care company.  There’s a gym next to the court. McGregor explains that on the first Thursday of every month production is stopped and the employees do something together. They played basketball last month.

Olowo-n’djo Tchala and his wife, Rose Hyde, started Alaffia in 2003. Olowo-n’djo, a native of the West African nation of Togo, began by selling jars of Shea Butter at the Olympia Food Co-op. Ten years later Alaffia is a global brand with millions in annual sales.

The company’s success is due in large part to its philosophy. Alaffia employs roughly 500 women in co-ops across Togo. These women use traditional practices to cultivate Shea and other ingredients. “Essentially, we can make anything by hand, without chemicals, that a machine can make,” says Tchala.

Alaffia has a belief system rooted in giving back. The company supports maternal health clinics in Togo and runs a campaign to provide bicycles to school children in that country. “You have to remember, our mission isn’t always tangible,” says Tchala. “It’s about a community believing in herself.”

McGregor shows me the “kitchen.” This is where the raw ingredients from Togo are mixed to create different products. Noticeably absent are the massive holding tanks and robot mixers. Instead, I see a couple people churning small batches with something you might find at your neighborhood bakery. A few feet away another person is spooning lip balm into individual containers.

McGregor has only been on the job a few months. His background is in politics and he’s a member of the Washington National Guard. McGregor has a palpable excitement about Alaffia that is hard to fake. His eyes widen when he talks about the company’s three state rule. In an effort to reduce its carbon footprint Alaffia will not order boxes and other materials from a location if it is further than three states away.

Alaffia’s hands on, environmentally friendly approach creates a company with a strong following.  29-year-old Kali Orkin believes in conscience based buying. “I studied sustainability in school and I like the idea of creating businesses that do more for society rather than just taking people’s money.”

It helps that the company makes a quality product. “The Shea Butter is nice because it isn’t diluted and doesn’t have any fragrance, which my skin is sensitive to,” says Orkin. Alaffia’s Shea based products use a larger percentage of the ingredient than their competitors. Why is this important? McGregor informs me that Shea is a natural moisturizer rich in vitamins and minerals.

“The notion that Africans can’t provide for themselves is wrong,” says Tchala. He says this with a quiet conviction. Tchala has a kind voice that masks an inner determination. Our conversation is easy and big.  We discuss poverty and basketball. He loves hoops but admits he’s not very good.

Tchala’s decision to move to Washington is mostly serendipitous. The company needed a port but Tchala doesn’t care much for big cities. Turns out Olympia was a natural fit and not just because of geography. Our area is forward thinking and environmentally focused, two things Tchala acknowledges. “The public’s views here have played a large role in where we are today.”