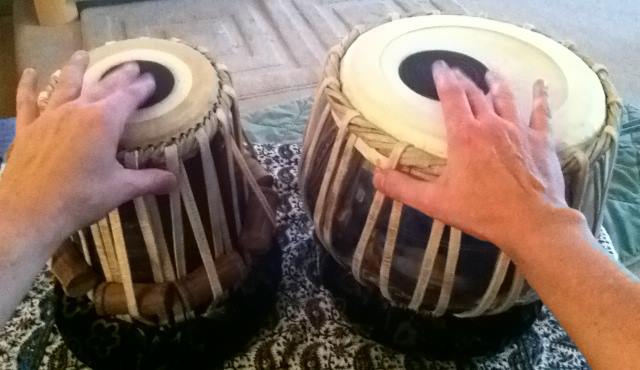 Olympia Rhythm and Dance (OlyRAD, for short) are serious about music and fun. This drum and dance group, headed by Laurie Peterson, knows how to get the audience moving. It is typical at one of their shows to see kids and adults of all ages dancing, playing the shakers, or joining in a “call and response” portion of a song. If you haven’t seen OlyRAD at a local performance, I highly recommend you check them out. What better way to shed the winter doldrums than to take your kids or a date to one of their fun, lively shows? You might hear the baladi Middle Eastern Rhythm, the West African coucou, or even a Bollywood number.

In speaking with OlyRAD’s founder, Laurie Peterson, it is clear that she is passionate about sharing world music. Peterson is a life-long musician. Growing up, she dabbled in instruments from clarinet to trombone, and has always been a part of bands. She attended college at the University of California at Los Angeles, and participated in the marching band while there. Peterson has been drumming for around 15 years, and has clearly found her calling.

The group has a unique history. Peterson shares that several of the founding members of OlyRAD, herself included, once played in Planet Percussion. The leader of Planet Percussion, Jay Sicilia, passed away in October 2011. Several alumni from the group reunited to drum together following his death. In the spirit of rebirth and renewal, the group re-formed themselves under a new name, and Olympia Rhythm and Dance was born. They led the Procession of the Species parade in the spring of 2012 and have been performing ever since. Since their founding, they have incorporated new members, and now total about two dozen drummers and dancers.

I have had the good fortune of seeing OlyRAD play several times. My mother is an avid drummer and joined the group in 2012. I actually had the opportunity to perform with them in the Fremont Solstice Parade in Seattle last summer. In marching with the band on a hot June day (I played the shakers, a beginner-friendly instrument), I was impressed by their high energy level and the amount of time, sweat, and passion they put into their music. The group was a crowd favorite, as always, mixing up Latin American and African rhythms.

In addition to being great fun, drumming has many health and psychological benefits. Drumming has served as a form of communication and an outlet of emotion for different cultures for thousands of years. Research shows that drumming can help reduce stress levels in the body and boost your immune system. Drum therapy has been used to help treat veterans and has been shown to help with the effects of Parkinson’s and Alzheimer’s in the elderly.

Many drummers find great relaxation in drumming. It also connects people to each other and the natural rhythms of the world around them. It’s no wonder that drum circles have continued to thrive throughout the ages. Members of OlyRAD have found the happiness, community and zest for life that comes from jamming together. As the saying by the ancient Chinese philosopher Lao Tzu goes, “Music in the soul can be heard by the universe.”

Have a hankering to pick up a drum? Or perhaps you’d like to don the colorful costumes and learn the fun dance moves of OlyRAD’s dance troupe. OlyRAD welcomes new members of all skill levels to join the group. They practice at every Thursday evening at 7:30 p.m. at the Chinese Healing and Movement Center at 606 Columbia Street in downtown Olympia. Many of the drummers have some experience, but beginners are welcome as well. For more information and to check out some fun performance photos, “like” their Facebook page.

OlyRAD’s mission is “bringing rhythm and dance to the hearts of our community.” They do this with passion and aplomb, showing us the best of Olympia: creative, energetic people coming together to celebrate life. From the swirling colors of the dancers’ veils to graceful Indian tabla drums, you are guaranteed to see something new with each show. And you are guaranteed to dance.

You can catch OlyRAD around Olympia this fall at the Combined Fund Drive Masquerade Ball on October 26. They will be donning bright feathered masks and performing for the crowd. They also will be performing in the Capitol Rotunda on the Capitol Campus in December. Hearing the group drum with the acoustics of the large rotunda dome is magical and definitely puts you in the holiday spirit – last year’s show was outstanding.

Throughout the year, you can catch OlyRAD at Sand in the City, the Lacey Ethnic Festival, and Spring Arts Walk.