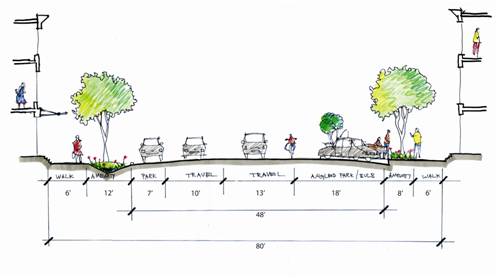 Ever watch children build cities out of blocks or Legos?  They just plow ahead, build as many structures as possible, and then arrange them in various configurations wherever there is space.

Building a real city requires considerably more thought and planning.  Before any streets or buildings are imagined, population growth, environmental impact, utilities and services and much more must be considered.

A comprehensive plan called “Envision Lacey” is in its second year of gathering information and conducting studies to determine how the City of Lacey will grow in the next 20 years.

Ryan Andrews, Associate Planner with the City of Lacey, asks the ultimate question: where will we live, learn, work, shop and play in the next 20 years?  He explains that state law requires city plans to be updated every ten years.  “We are required by law to update city plans and tell how the city is going to grow.  There is a twenty-year planning horizon and we visit it every 10 years,” Andrews explains. 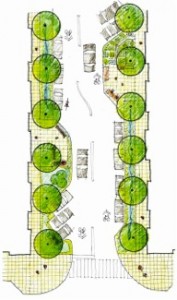 Andrews says that the City of Lacey and its surrounding area known as an Urban Growth Area is expected to grow by as much as 30,000 people (from 80,000 to 110,000) in the next 20 years, regardless of whether or not growth is desired.  Ideally, citizens of Lacey will get involved now and help determine how that growth will look.  The City of Lacey wants folks to take part during the planning phase rather than waiting until they see bulldozers and construction crews in their neighborhoods.

Picture the island of Manhattan, which is approximately 34 square miles.  Lacey’s projected Urban Growth Area will be the same size in the next 20 years.  While Manhattan has to squeeze one million people into its space, Lacey will have room for its’ future 110,000 residents to spread out.  Questions such as how to accommodate existing neighborhoods and whether new tracts of land are developed must be carefully considered to ensure high-quality function and appearance.

“Public input is important if citizens want to effect change.  Be present early and often, see the plan, get involved by attending an event, or just stop by to chat,” encourages Andrews.  The city planner’s philosophy towards the Envision Lacey Plan echoes the city’s tagline, which is “Shaping Our Community Together.”

The core group has been working on an early draft of the plan for a year and expects to start zoning by next year.  Hopefully this early draft will get the word out and attract a broad spectrum of residents, foot traffic and phone calls for their opinions.

The Envision Lacey Plan takes into account six area focuses that include: Environment, Complete Streets, Quality of Life, Utilities and Services, and Place-Making.  Each of these areas contains several sub-categories, which will be considered throughout planning. 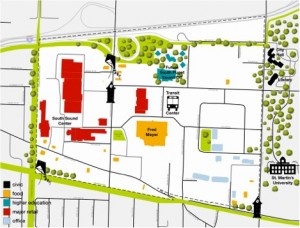 On October 15th, interested residents are invited to join city planners at their Open House.  There will be an informal presentation by planners and an opportunity to visit booths featuring the six focus area.  Ryan stresses that anyone interested in the project is invited, and that residents do not need to be experts to give their input.

If you would like to be a part of envisioning how Lacey will look or are just curious about how a city develops, please stop by the City of Lacey’s Open House on October 15th from 5:30 – 7:30 p.m. at Lacey City Hall.

You can also view a copy of the plan on the website at www.ci.lacey.wa.us/envisionlacey.