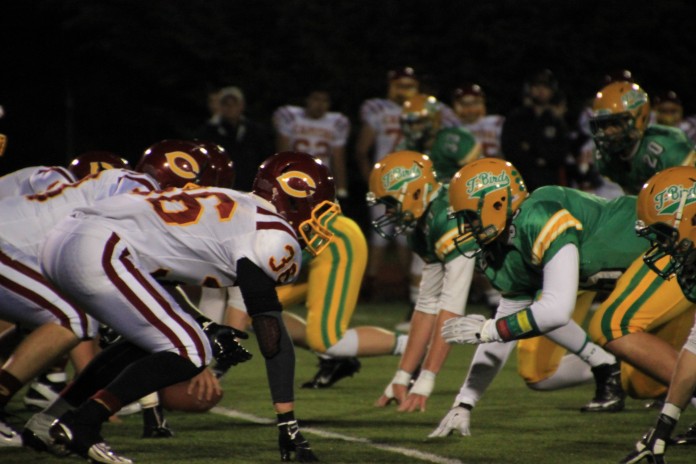 There was little drama on the gridiron, Friday, September 27, when Capital traveled to Tumwater School District Stadium to take on the T-Birds.  Tumwater took down the Cougars Friday night by a score of 49-22.  Tumwater moves to 4-0 on the season while Capital, amidst likely the toughest slate of games to start a season among high school teams, fell to 0-4 with the defeat.

The T-Birds have scored over forty points in each of their four victories, with the closest margin of victory being 17 in last week’s 41-24 win at Inglemoor.

Tumwater will travel next week to take on their second consecutive Evergreen Conference foe in W.F. West, who is 4-0 and ranked among the top 2A teams in the state.  The week after, the T-Birds will host 4A power Bellarmine Prep.  Capital will host Centralia on October 4 and North Thurston the following weekend.

Tumwater prepares to cap a perfect season (13-0) with a win against Lynden in the state championship game.

Senior quarterback Jayden Croft added 30 lbs., to his frame in the offseason to help prepare him for the 2013 season. The added muscle, plus an improved confidence within the pocket, has given the T-Birds a more balanced offensive attack.

Senior quarterback, Jayden Croft, is appreciative of the fan support for the Tumwater football team.