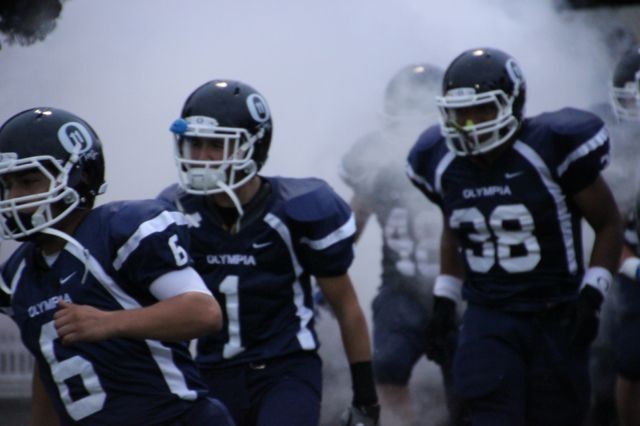 A capacity crowd  filled Ingersoll Stadium for the annual Spaghetti Bowl matchup between Olympia and Capital High School on the gridiron.

The 37th meeting between the two schools saw a pair of rivals come into the game with an 0-1 record each.

After losing 19-0 last year to the Cougars, Olympia took back bragging rights from their cross-town rivals with a 20-6 victory.

Capital, in the midst of the state’s most brutal non-league schedule (they fell to Newport 35-7 last week), will travel to 4A power house Bothell next weekend after having their first two games of the season on their home field.

Olympia, who was technically the home team in Friday’s game, came out firing scoring on their first drive thanks to a touchdown pass from quarterback Derrick Becker to standout receiver Mitch Fettig.

Olympia would add another touchdown in the first half, while Capital would score one of their own to make it 14-6 Olympia at the half.

The Bears would score again in the second half to create the final score, giving Oly their 17th win in the rivalry’s history.

Timberline travels to Ingersoll Stadium next Friday to take on Olympia.