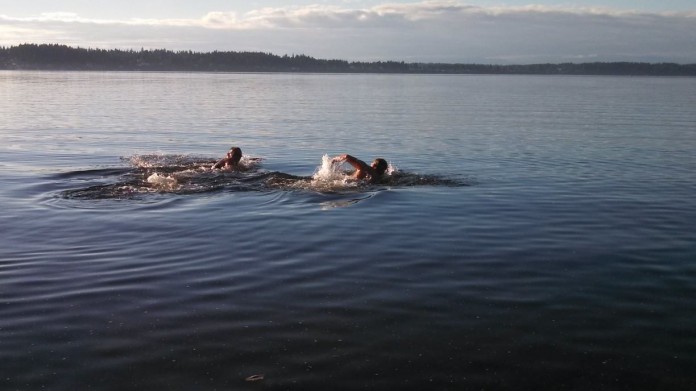 I stand on the edge of Cooper Point.  I look east towards Boston Harbor and wonder how long it will take me to swim to the other side.

Over Labor Day weekend, Travis Matheson and Jon Cushman started at Cushman Farms, on the way to Boston Harbor, journeyed the 1.7 mile distance to the other side of Budd Inlet.

The journey across the anytime-of-the-year-cold water began as a spoken thought at the Cushman household on Thanksgiving.  After some training sessions in the bay, the swim took place, albeit in an impromptu fashion.

“I always thought it would be cool to swim across the bay, and I mentioned it to Travis.  He said he’d be interested and it sort of went from there,” said Cushman, an Olympia native. “Travis is the best athlete I know and it wouldn’t have happened without him.” 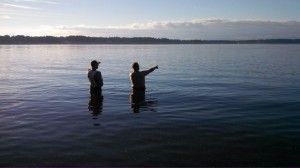 “We swam a couple times in the bay, and we were going to go half-way one day and turn back but I said let’s keep going,” Cushman added.

With only a speedo bathing suit and “insulated” shirt on, Matheson undertook not only a trip to Cooper Point, but circled back again to Cushman farm.

“Oh it was definitely cold,” said Matheson. “During the practice swims, I would notice it gets pretty cold after about twenty minutes, especially out of the wet suit.   On the way back, that’s when it was really cold.”

Cushman did not swim back with Matheson, but traveled by kayak with Anne as his longtime friend swam on.

“It was endurance.  Travis is way farther along in his endurance than me,” said Cushman, who swam to the other side of Budd Inlet in 55 minutes. “I was cramped up and don’t think I had the endurance to get back.”

Matheson completed the round trip in 1 hour 55 minutes on what was a beautiful sunny day on the Puget Sound.

However, the calm weather did not mean it was an uneventful journey. 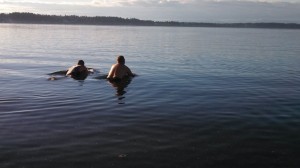 “Typically we don’t go all the way out to the middle.  When you’re out there, you’re in a boating alley. We started at 9 am, and came back through the middle around 10:30,” said Matheson, who used an electronic navigation system to track his pace and time during the swim. “The water got choppy which wasn’t surprising because it was Labor Day weekend.  Then we realized it the Tugboat Races, so we probably wouldn’t have gone out there had we thought about those factors.”

Along with frequent jellyfish stings, the duo also ran into one of the Puget Sounds most famed attractions.

“I saw a dark mass glide through the water to the left. I thought that I probably didn’t see anything, but your mind starts to wander to worst case scenarios,” said Cushman. “We kept going a couple hundred yards, stopped, and Travis heard this heavy breathing right behind him.  And we turned around to see a big seal about 12 feet away.”

“Seals are completely nice, but you can’t see much,” said Matheson, a father of three. “I saw a profile of the thing coming towards me, and it was a little startling.  My wife gives me a hard time about that.”

Along with wildlife sitings, boaters and accomplishing the feat, Cushman was treated to another big event over the weekend when his wife gave birth to their new child the very next day. 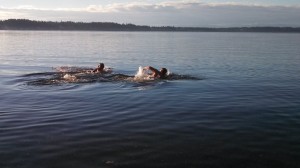 “Yeah it was sort of a whirlwind,” Cushman chuckled as he looked back on the weekend.

This is certainly not the end of Boston Harbor’s dynamic swimming duo.  Matheson, who has already competed in several Ironman style events, will be running a half marathon at Black Diamond.  Cushman noted that he plans to work towards completing the roundtrip swim across Budd Inlet and that he will train more in the bay with Matheson.

“It’s been an awesome process.  Travis is a good guy, and without him calling me out on the carpet, this wouldn’t have happened,” said Cushman. “I talked a lot of smack about swimming across and he said let’s do it.”

Matheson has already noticed that the swim changed his perspective.

“I am very proud.  It’s a neat accomplishment. My family spends a ton of time down there and my kids were down there watching,” said Matheson. “It’s neat to look across and think how far that distance is.  I’ll never look at it the same.”