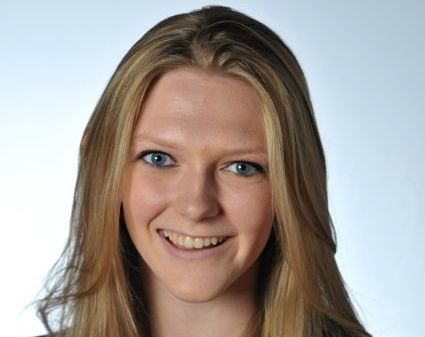 Going to college, no matter how near or far from home, is a time of excitement and major adjustment.

However, traveling across the country to attend a university requires extreme acclimation.  For scholarship athletes, their teammates, coaches and athletic department officials can quickly speed up transition.

For Michaela Berendt, one of the most accomplished volleyball players in the history of Olympia High School, the transition to Villanova University, located near Philadelphia, has been easier than expected.

“Luckily a lot of girls on the team are from California,” shared Berendt during a cross country phone interview with ThurstonTalk.com. “They’ve undergone that change I’m going through now.  (The East Coast) is just different than the west.”

Berendt will now look to have a similar impact during the next four to five years for the Wildcats, a Division I program competing in the Big East Conference.  The combination of high level of competition and rigorous academics drew Berendt to the school in the first place.

“When I was touring schools, I found all these little reasons why (schools) weren’t right for me. Sometimes it was size, or the academics weren’t strong enough,” Berendt said. “When I came to Villanova, everything just sort of fit.  I immediately liked the coaching, the girls on the team and what the University as a whole stands for.”

This is not the first time Berendt has had to adjust to a different type of school.  She attended a private middle school in the Olympia area and faced a tough decision upon entering high school – continue on the private school path or switch to her neighborhood public high school.  Her decision is one she credits for a majority of her success both on the court and in the classroom.

“Going to Olympia High School really opened my eyes to a lot of things, and I’m so glad I did it,” said Berendt.  “I feel it’s one of the most academically rigorous schools in Washington. Working really hard on the court carried over to working hard in school.  You can’t have a really great work ethic forty percent of the time.  Attending a school like that has helped me.”

During her sixth grade year, Berendt experienced her biggest growth spurt, gaining close to five inches.  By the time she reached high school, she plateaued to her current height, and immediately realized the work required to obtain coordination and control of her body.

“Lifting and participating in a sport helped control my body in general, mostly because I gave so much time to working on it,” Berendt said. “I was really underweight for my height just because I was growing so much and sleeping so much all the time.”

The hard work has clearly paid off for Berendt, but she realizes the transition from high school to collegiate level competition requires even more sweat and dedication.

“All summer, I had a workout packet emailed from (Villanova) coaches for time in the weight room.  I did a lot of conditioning and weightlifting every day,” shares Berendt. “I’m used to working out, but not following that program. It was a step up, just doing a lot of sprints.  It was great conditioning for me and that was the main thing for this summer.”

On a team filled with six upperclassmen and a talented sophomore class, one would assume playing time would be tough for an incoming freshman.  However, Berendt’s height (she’s the second tallest on the team) and ability at middle blocker make her a talented option for the Wildcats.

“At this point, I’m pretty set at middle blocker in terms of my position.  I’m not quite sure what that means in terms of opportunities to play,” she noted.  “I know that right now my role is to try and improve and see how far I can get in the pre-season.  I’m just going to try to learn as much as I can.”

Away from the court Berendt will be enrolled in the University’s College of Liberal Arts and Sciences, and hopes to continue one of her favorite pastimes, volunteering in the community.

“In (high school) I volunteered at GRuB just to help out,” Berendt said.  “There are a lot of opportunities here to get involved in the community, and it’s something I want to keep doing.”

Berendt credits her growth as a well-rounded student athlete in part to the guidance she received from longtime Olympia High School head coach Laurie Creighton.

“Laurie Creighton and the coaching staff expected a lot out of their players and that’s something I’ve brought (to Villanova),” said Berendt, who helped out at Creighton’s youth camp this summer. “I’ve texted her a couple times since I got here and I want to keep in touch with her.  She’s such a  positive female role model.”

Like all college freshmen, Berendt will miss a few things from home.  A trip to San Francisco Street Bakery is near the top of the list when she returns to Olympia, as are visits to family and friends.

Now, Berendt can reminisce on the great times she had, and feels the values and experiences from her hometown will help her throughout her collegiate career.

“This will sound silly, but on the first day (the 2011 state tournament) it was November 11, 2011,” Berendt said. “A (teammate) was superstitious, and said that we had to make a wish at 11:11 on 11/11/11.  We made that wish and won the whole thing on November 12, at 11:11 at night. Things like that are so crazy and just make me smile. I love all the people I’ve met through volleyball at Olympia, there isn’t anyone who I wouldn’t say would be like a best friend or sister.”

“Everyone (around Villanova) has been so supportive,” said Berendt, the only child of parents Paul and Beth. “All my teammates have been great, letting all the freshmen feel included. I’m so excited to see what the next couple of days, and next couple of months, have in store.”