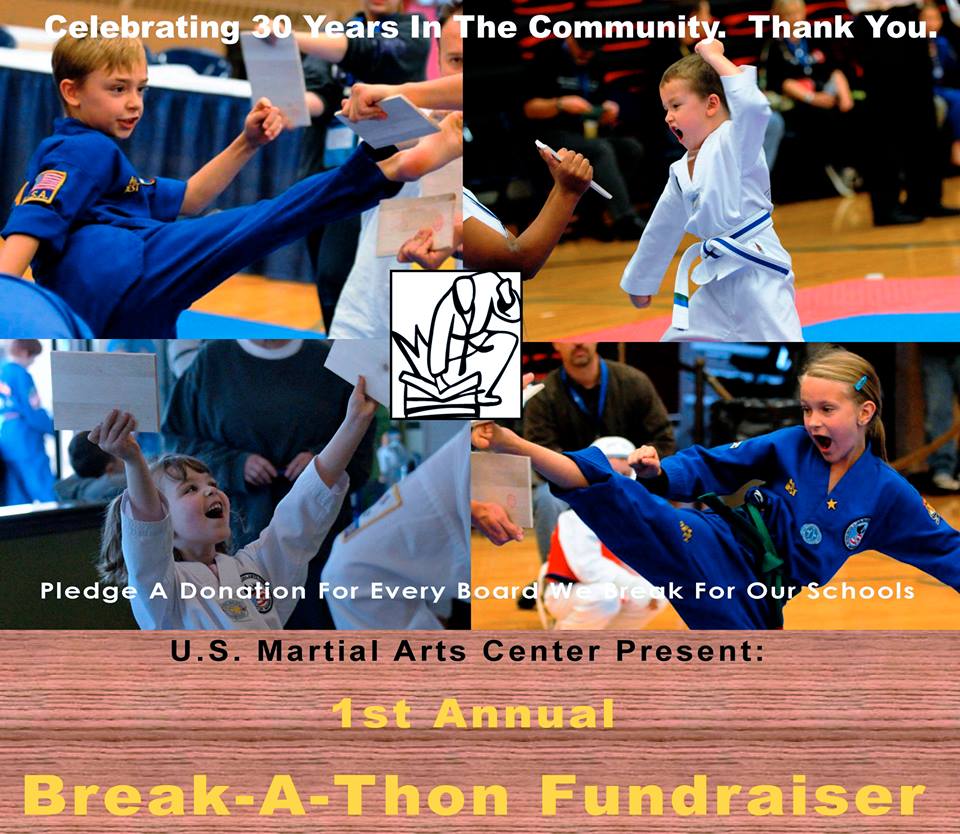 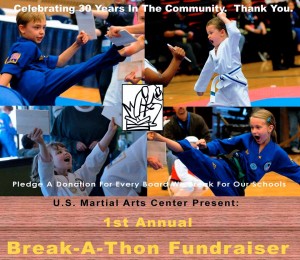 The Break-A-Thon Event is open to friends and family, particularly those who support and live in the Olympia and North Thurston School Districts.

“When you kick through the board, you show support of a “can do” attitude towards support of our local schools. This is truly a way to show support to our community.” said event sponsor Master Lee of U.S. Martial Arts Center.

All pledges and donations collected from the event benefit Olympia and North Thurston School Districts. Everyone who donates has the opportunity to attend and watch U.S. Martial Arts Center students break boards with their taekwondo skills.

The aspiration of this event is to raise $30,000 to coincide with our celebration of our 30th year teaching in Washington State and more specifically being part of the Thurston County Community.  U.S. Martial Arts Center was founded by Grand Master Young-Hak Lee in 1983 as one of the original martial arts schools in Olympia.   Today, he continues to teach students from all walks of life.  The family tradition of teaching martial arts has also been passed down to his daughter and son, Masters Angie and Jason Lee who teach and own U.S. Martial Arts Center locations in South Lacey and West Olympia.

In addition, a special guest team from Korea: the World Champion Sehan University Taekwondo Demonstration Team will showcase their skills during an amazing martial arts demonstrations, which will be held throughout the event. A separate event and performance by the Sehan Taekwondo Demo Team will be held later in the evening after the Break-A-Thon Event.  Tickets available at any U.S. Martial Arts location or at the door.

For more information on the event and how to attend please, contact Master Jason Lee or Ms. Debbie Winters at (360) 357-6433 or info@usmactkd.com.

U.S. Martial Arts Center (USMAC) has been teaching Taekwondo in the greater Olympia and Lacey area for 30 years. We are a family operated business and are an award winning martial arts school. The USMAC now has locations in South Lacey, West Olympia and Lacey.