Think Michael Douglas yelling into a Motorola DynaTAC circa 1987. It was the late 80’s and cell phones were first becoming status symbols as portrayed in movies like Wall Street. Everyone wanted one, but they were expensive to buy and service plans were difficult to navigate.

Olympia real-estate agent Bob Solie and his colleagues at Coldwell Banker wanted mobile phones too. Solie decided to research available options. “In 1988 cell phones cost about $1,500 each and weighed a ton, but we considered it to be a great deal. I started selling phones to friends and family and a small referral business took off. Eventually, I stopped selling real estate and focused on building my cell phone company, Washington Cellular. I’ve been at it for 25 years, and now my son, Dan, is a business partner,” said Solie.

The business quickly grew from referrals in Thurston County and Washington State, but now they have customers all over the country.

“We are a high-tech cellular provider. We buy time from AT&T and sell it to individuals and businesses. We can also provide customers with any phone available in the marketplace, from flip-phones to the latest iPhone,” said Solie.

Flip-phones? “A lot of customers still love their flip-phones and have no interest texting or checking email from their phones, but most people are trying smart phones and once they switch they can’t imagine life without them,” he said.

There are several advantages of choosing a local company like Washington Cellular for cell phone service. We’ll take a look at them one-by-one:

If you decide to upgrade your phone then you only pay the upgrade price. Customers are encouraged to stop by anytime and review their current phone needs with the Washington Cellular team. They’ll make sure you are using the right phone with the right plan.

“If you break your new iPhone, come on in and pay the upgrade price only. Don’t bother with expensive insurance packages for your phones when you can get upgrade pricing,” said Solie.

Cell phone bills are notoriously difficult to understand.  “Our bills are designed to be simple and easy to understand. We clearly lay out what you get for your money. If you have any questions you can just call us and our Olympia staff will walk you through a solution,” he said.

Because Washington Cellular does their own billing, they review customer charges and suggest changes that will lower monthly bills based on usage. “We can listen to what the customers’ needs are, personal and professional, and help them find the perfect product. We do a lot of counseling to make sure people have the right equipment and plan for their needs. We’ll take the time to ask the right questions and make sure they have what they need,” said Solie.

He jokes that Washington Cellular is one of the few companies where any customer can call and talk to the president. “Our customers stay with us. We are on a first name basis,” he said. 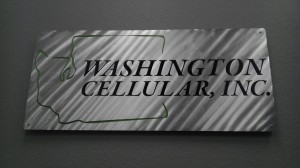 New phones can be intimidating to use. Arrange a training session with the Washington Cellular team to make sure a phone is set up correctly and that the customer knows how to use it. By the time they leave the office, their email, voice mail and text options are all ready to use.

“If we need to spend an hour with someone, we will. When they walk out the door that phone should be fully functional. We sell phones at cost to our customers. We have no commission or incentive to upsell them to a particular phone. We are interested in finding the right phone for the individual,” he said.

Washington Cellular is a locally owned, Olympia-based business, run by Olympia-born, long-time residents. In fact, Bob Solie is the son of a former brewer at the Olympia Brewery and Dan Solie’s mother, is the daughter of Adolph “Bump” Schmidt, a former president of the Brewery.

Washington Cellular actively supports Rotary, SafePlace, and other local charity organizations as well as a youth soccer sponsorship. Bob Solie is currently the president of the Tumwater Rotary Club and has been involved in POSSCA and other local fundraising events.

Their office is also home to an incredible collection of Olympia Beer memorabilia, which is another story all together.

Stop by their office at 1025 Black Lake Boulevard, or www.washingtoncellular.com. They can also be reached at 754-2310.

Cell Phone Fun Fact # 1: According to Wikipedia the first handheld mobile phone was created by Motorola in 1973. The phone weighed 2.5 pounds and took 10 hours to re-charge after only 30 minutes of talk-time.

Cell Phone Fun Fact # 2: The second-generation mobile phones emerged in the 1990s. Europe developed the GSM standard and US, the CDMA standard. Digital transmission was used instead of analog. The era of G2 was born. The trend also created a move away from the larger “brick” phones to smaller devices. Improvements in battery technology made this possible.

Cell Phone Fun Fact # 3: More and more people began to use 2G phones in their daily lives. Demand for data services grew. Industry worked on the next generation of technology that became known as 3G. According to Wikipedia, “The main technological difference that distinguishes 3G technology from 2G technology is the use of packet switching rather than circuit switching for data transmission”.