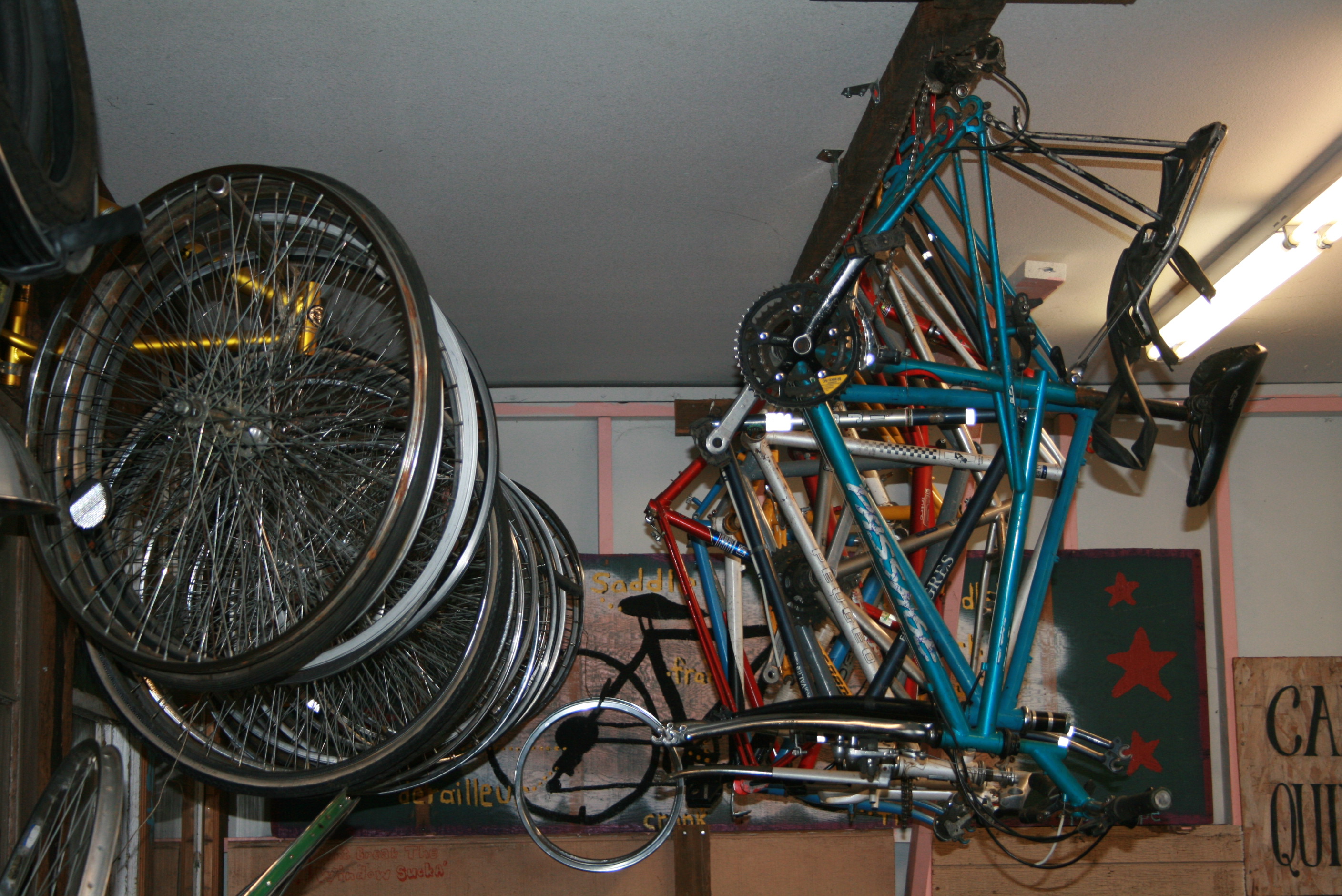 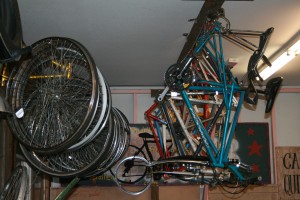 Up and running for around 11 years now, Bike and Bike donates bicycles to low income and homeless citizens, provides necessary bicycle repairs, educates riders on making their own repairs and sells used bikes at low prices to the community.  Bike and Bike also promotes cycling as a way of transportation and recreational exercise and socially connects riders in the community.

“We always seem to have people stop by to see what’s going on, organize rides and races and just meet new people,” said Alexander Mac Donald, who runs Bike and Bike.  “People who tour through town often will stop here and look to fix their bikes.  There are a lot of different functions that are combined here.”

As a volunteer at Bike and Bike for six years, Mac Donald began to hone his bicycle mechanic skills around four years ago.  Able to fix a flat since age 8, Mac Donald now is able to repair, construct and dissect (seemingly) anything bicycle, and says it’s important that he uses his skills to help the community.

“People come in saying ‘my breaks don’t work, my tire’s flat, it hurts when I ride it,’” Mac Donald said. “There are a lot of misconceptions about bicycles and building bikes, and problems can come from people riding the wrong way or being positioned wrong.  Sometimes the bikes people are riding were constructed wrong.  So it’s our focus to fix things and also educate people and make sure mistakes aren’t made again.”

Within the two story shop, everything on the first floor, which includes wheels, frames and other various parts, are free.   Nicer equipment is located on the second floor and can be purchased for a low price.

“People can walk out of here with a free bike or one for $40 with every part they’d ever want,” Mac Donald said.

“There are a lot of bicycle co-ops across the U.S., Canada and Mexico now. It’s a growing trend as parts have become more expensive and as more people begin to ride,” Mac Donald said. “They’re popping up across the country.  It’s much different than your traditional style bike shop, and usually a better model.”

Once Bike and Bike fixes, donates, or sells a bicycle, it stays in the community, one of the main objectives of the shop.

“I see people we help all the time.  It’s easy to see because Olympia is a bicycle town,” said Jason Lusk, a volunteer at Bike and Bike.  “We go outside for twenty minutes and see four or five bikes we have helped.  Sometimes the bikes trade hands or owners, but they stay in the community.”

Parts come to the shop through private donations, volunteer salvaging efforts or from the two biggest donors – The Bike Stand and Deschutes River Cycling.  Lusk says that the shop is working on forming a partnership with local scrap yards and hopes to have two bicycle drives per year, one in the spring and one in the summer.

Thanks to donations and the salvaging efforts of their volunteers, Bike and Bike has a terrific surplus of equipment.  However, that influx in supply has led to other issues.

“We’re a little behind these days because of a lack of space and money.  We need some more volunteers as well.  These things are not the easiest to come by when you’re a not-for-profit bike shop,” Mac Donald said. “To get where we want to be, we need to expand and that will take some help for sure.”

Despite the challenges, the shop pushes forward.  Mac Donald said he is planning on teaching Bike and Bike volunteers advanced mechanics so more shop workers can assist with the issues presented to them.  To help accommodate the working crowd, the shop hopes to offer evening repair hours. Mac Donald also noted that Bike and Bike is looking to form a youth program in the community to help instill cycling advocacy at a young age.  All such efforts are geared at shifting the way the area looks at cycling. 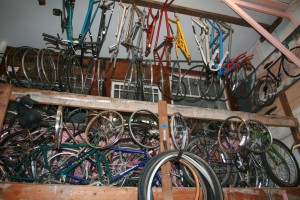 “I try to get all my friends on bikes, and bring them in here. I see more people riding and more people are beginning to care about traffic and the rules on city roads and paths,” Mac Donald said. “It’s important they know what’s available to them and what are good and bad products.   Also, we work on dispelling some myths on the type of bike you should ride.”

Mac Donald remains focused on his main cause, which is helping the community and those in need.

“Helping others is the only reason I do it.  It’s a labor of love and that has to be the only reason,” Mac Donald said. “If you really want to help others, you have to spend time here and have that attitude.”

For more information on Bike and Bike visit the storeat 302 4th Ave E in downtown Olympia.