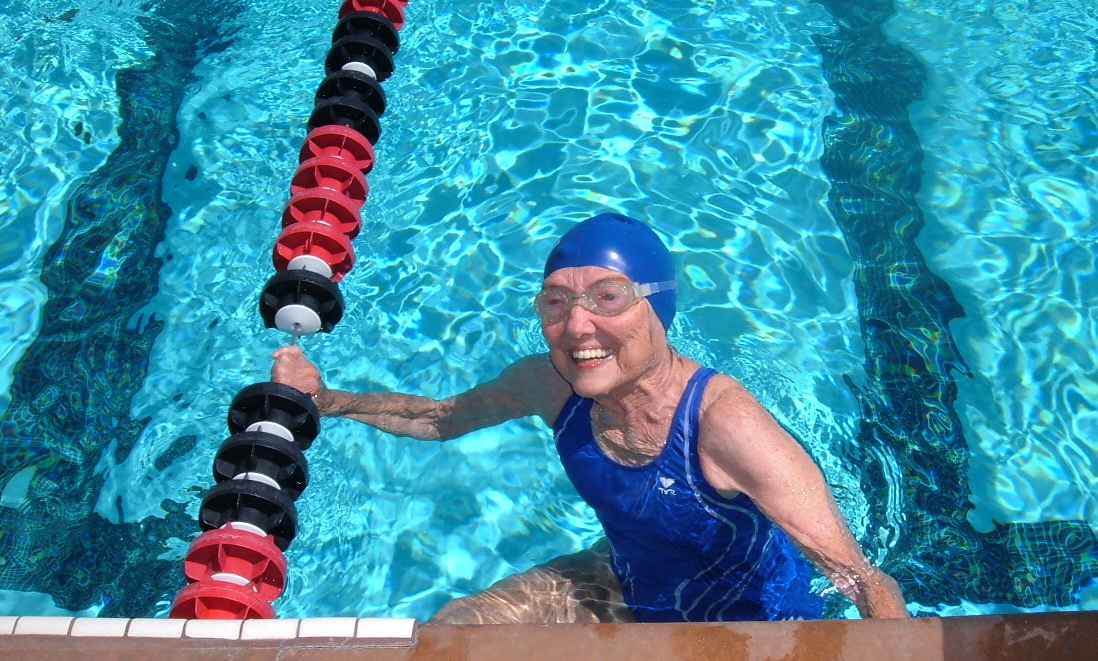 While humans may not be suited for long periods of time in the water, some people are able to adapt, and end up preferring liquid over land.

One of those people is Olympia, Wash. area citizen Evelyn Hoffman, a member of the South Sound YMCA Masters Swimming team, and an annual participant in the Puget Sound Senior Games.   Hoffman, now 94, lives on Offut Lake South of Olympia and has been swimming a significant portion of her life.

“I’ve been swimming for 90 years.  It was something I enjoyed doing growing up and for fun,” Hoffman said. “Competitively, I never dreamed of swimming at that level, but I started that in 2000. I had a friend in Seattle who encouraged me and told me to try it and have fun.  I had never been in a pool before, just had swam in open lakes and water and quarries including the one in Tenino.”

Mel Smith, who ran the swimming portion of the Washington State Senior Games at the Briggs YMCA last weekend, is a coach for the local masters swimming program and the head coach for the girls and boys swim teams at Olympia High School.  Smith, a senior games participant himself, says the local swimming community for senior citizens is growing in popularity.

“Swimming is such great physical activity for anyone of any age,” Smith said. “So people hear about it and about the benefits, so they think, I could do that.  It’s impressive to see people like Evelyn swimming at such a high level and that inspires others.”

In 2009, Hoffman put her skills to the test on a national stage, as she participated in the 2009 U.S. Senior Olympics in Palo Alto, Calif., on the campus of Stanford University.  At the Senior Olympics, Hoffman brought in a haul big enough to make any competitor envious.

“When I went to Stanford (in 2009) it was one of the big thrills of my life,” Hoffman said. “I won three Gold medals and a Silver medal, and was the only women to sign up for the 100 meter individual event.  So that was a memorable accomplishment, and really gave me recognition for my swimming efforts.”

Hoffman has yet to rule out a trip to Cleveland, Ohio, for the 2013 National Senior Games, but if she does, it will be with the company of her life-partner Larry Zessin.

“Larry is always there for me and especially needed for me to travel,” Hoffman said. “He’s such a positive person, and really makes my life complete.”

“The attitude and determination she shows, how could you not be inspired?” Hoffman asked.

Hoffman’s success has provided area swimmers a blue print on how to succeed at the competitive level.

“She’s a prime example of what hard work, a positive attitude and determination will do for a person,” Smith said. “And she is not alone.  There are many local swimmers who are talented, work hard and are good company to be around.”

One of those other swimmers is Marjorie Wintersteen, age 91, of Olympia.  Wintersteen and Hoffman swim together frequently and still kayak with one another on Offut Lake.

“She’s a great friend, very nice and just fun to be around,” Wintersteen said.

The feelings are mutual for Hoffman.

“Having someone like that to be around and to help push each other, that’s a special relationship to have,” Hoffman said.

Hoffman offers sound advice for those skeptical of jumping back into the water.

“I love to swim and at my age, walking is a challenge,” Hoffman said. “I have no pain in the water.  I’m most comfortable in the water rather than on land and I don’t see that changing anytime soon.”