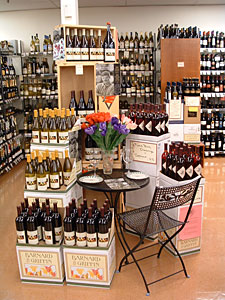 The perfect glass of wine, served at the right temperature with the proper match to food, creates a delightful meal.

But, if you are not a professional wine taster, or just enjoy trying something new without the commitment of a full bottle, stop into Bayview Thriftway to enjoy Fridays Uncorked.

One Friday each month, Bayview School of Cooking staff pour delicious wines in the mezzanine of Bayview Thriftway.  $12 buys five tastes of about two ounces.

The Bayview School of Cooking team selects a theme for each monthly event.   The theme may focus around a specific type of wine, such as sparkling or dessert wines.

Alternatively, the theme may revolve around a holiday.  For example, in October the cooking school veered from wines and highlighted beer for an Oktoberfest event.

“Rob selects wines and works with distributors and vendors to supply the wine for the event,” explains Leanne Willard, Director of the Bayview School of Cooking.

“We factor in not only the type of wine but also the cost of the wine for the customer,” adds Bayview Thriftway Store Manager, Carol Lundblad.  “We want to select wines that are a good value for consumers.”

Lundblad says that they like to feature wines that customers are familiar with and then place the wine at a good value. 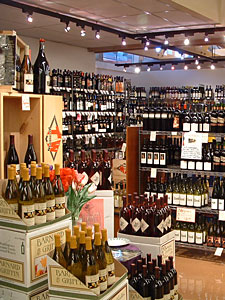 “Sometimes we also like to introduce new wines through Fridays Uncorked.  This gives a customer an opportunity to taste the wine without buying a full bottle,” comments Lundblad.

At Bayview Thriftway, shoppers will notice the featured wine for about six weeks.  Lundblad explains that the store stocks the wine for a few weeks in advance of the Fridays Uncorked event.  The wine then remains in a featured location for a few weeks following.

“Stocking the wine for about six weeks gives consumers the chance to see what’s going to happen, experience the event, and then have a nice supply on hand after Fridays Uncorked,” summarizes Lundblad.

Attending a Fridays Uncorked event is a relaxing way to spend the evening.  “Taste at your own pace, walk around and enjoy our beautiful view,” says Willard who adds that there is plenty of time to talk with friends and ask questions about the wine.

A tasting sheet lists the wines and educates tasters about the qualities of the wine.  The tasting sheet also includes suggestions for food pairing.  Typically, a representative from the winery is also available to answer questions.

Whether you want to try a new wine, pick up tasting tips, or just enjoy a delightful evening with friends, swing by Bayview Thriftway for an upcoming Fridays Uncorked event. 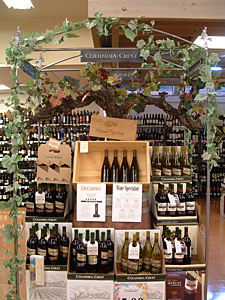 The City of Tumwater Parks & Recreation Department is offering a wide variety of online programming for both youth and adults. From Magic Lessons and STEM education for kids to Yoga and MixxedFit for adults,[...]
all-day What’s Blooming Around Budd? @ Online
What’s Blooming Around Budd? @ Online
Jul 8 all-day
Beginning Thursday, June 18 at 3 p.m. Follow each week as Pacific Shellfish Institute (PSI) dips their nets to see what plankton is blooming in Puget Sound and around our local lakes. Learn plankton identification[...]
7:00 am SPSCC Virtual Open House Week @ SPSCC-Online
SPSCC Virtual Open House Week @ SPSCC-Online
Jul 8 @ 7:00 am – 8:00 pm

As we cautiously begin to gather in places outside our homes with people outside of our households, Phase 3 of Washington’s Safe Start program...