Home Featured Business How They Do It: Ostrom’s Has Been Cultivating Nutritious, Delicious Mushrooms Since... 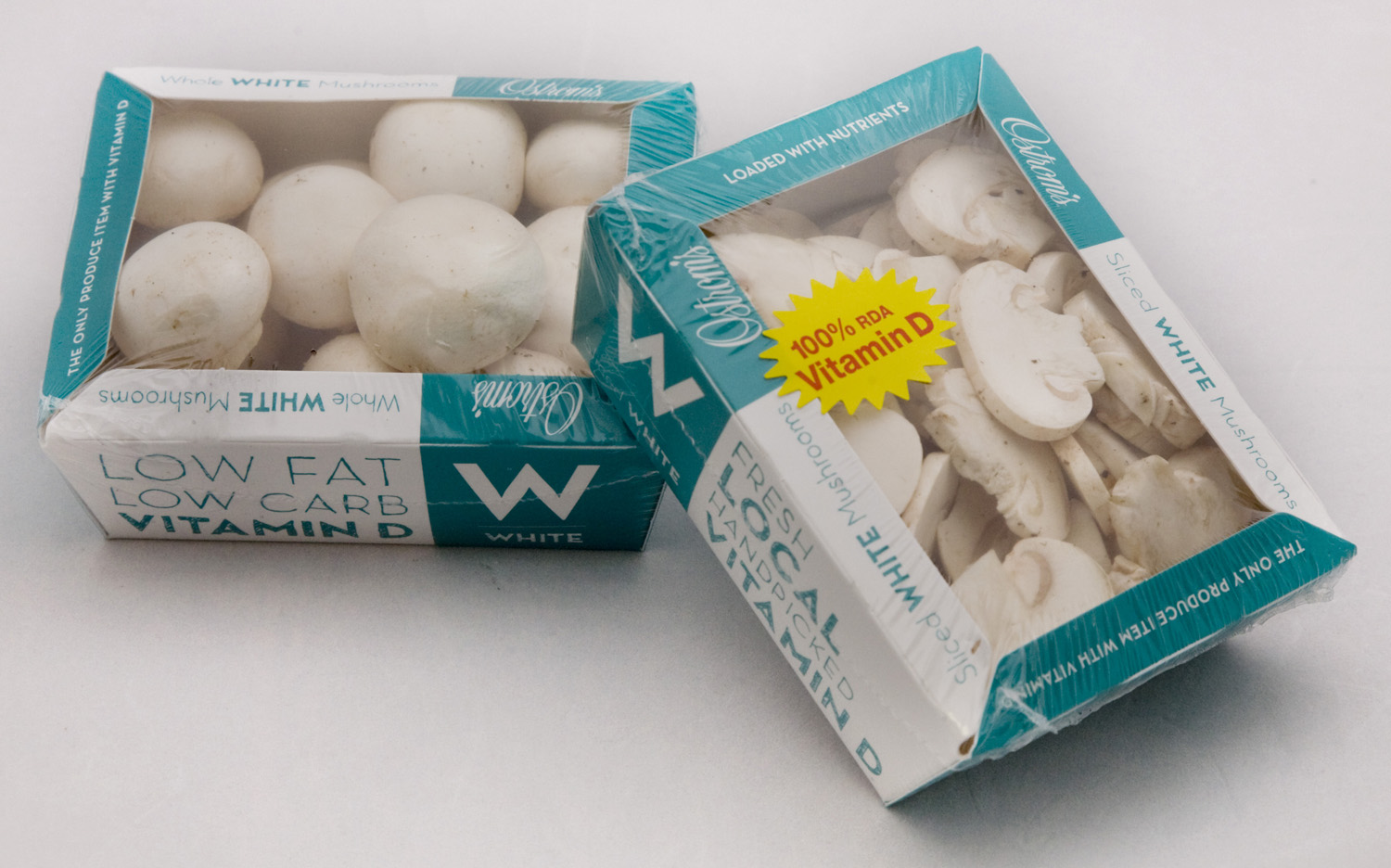 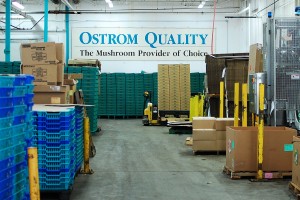 I have decades of eating delicious mushrooms under my belt, but had no idea how they were grown. How could that be?

A recent Friday morning found me sitting with Fletcher Street, Ostrom Mushroom Farm’s Director of Marketing and Sales and daughter of William Street, Sr., who bought Ostrom’s from original owner Cameron Ostrom, in 1964.

I quickly found there’s no better place to learn the ins and outs of mushroom farming – and how Ostrom’s Mushroom Farm does it with added quality, nutrition, recycling, and innovative packaging.

Cameron Ostrom started Ostrom’s in Seattle’s northeast Lake City region in 1928. In 1967, three years after buying the business with a partner, William Street, Sr., moved the expanding operation to Olympia to what had been an old Green Giant Farm at the corner of Marvin Road SE and Steilacoom Road SE.

With the move, Ostrom’s continued its gradual move away from canned products, as more people turned to fresh foods after WWII. By the 1980s, canning ceased altogether. “You tend to can your B-grade product, and when you’re growing well, you can minimize that,” Fletcher explains. And with stiff competition from Asian companies, canning no longer made financial sense.

Ostrom’s still gets the occasional phone call from older folks who want to know if they still sell their canned steak sauce. “We made a cream sauce and steak sauce that were really good,” Fletcher says with a laugh. “But we don’t even have the recipes anymore!”

Ostrom’s hit a few snags in the 1970s while implementing new growing technology from Holland, which came with a huge learning curve. The company eventually went into Chapter 11 bankruptcy. But two other families – the Knudsens and the Lindleys – invested in the farm with the Street family.

“Together we turned the farm around and they’ve been partners with us ever since,” says Fletcher.  David Knudsen serves as the company’s President. Ostrom’s now grows 13 million pounds of mushrooms a year and distributes them throughout Washington, Oregon, and Alaska. It also operates a smaller farm in Everson, Washington.

But back to the nitty gritty of how mushrooms are cultivated.

A great video on the Ostrom’s website shows how the process works. 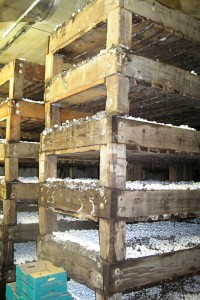 Mushrooms are grown vertically, in wooden trays, in climate-controlled rooms atop a bed of clean, pasteurized compost made right on the farm from ingredients sourced from the Pacific Northwest – byproducts of other industries, such as wheat straw and dried poultry waste.

Eighteen rooms – each 5,400 square feet – hold the harvest, which, from braking bales for compost to completion, takes 90 days.

“You make your compost, pasteurize it, put it in your trays and mix it with spawn, which is an inoculated rye or millet grain,” explains Fletcher.

A spore grows and the mycelium – the vegetative state of the mushroom that looks like white, furry filaments – is then kept in a warm, moist environment of about 80 degrees with lots of CO2.

“You don’t want to come into a room that’s doing a spawn run and hang out,” Fletcher says with a chuckle, referring to the abundance of CO2 used at this stage.

Once the filaments come up to the optimal level – talent and experience are key to choosing the correct moment – pinning is induced; a shock of fresh air is let in, flushing the CO2, and the room temperature is lowered to 62 degrees.

Now the filaments form into clumps, or pins, which quickly grow into mushrooms.

Ostrom’s employs nearly 300 workers at its two farms, with over 100 pickers taking on the daily task of handpicking the crop at just the right time. “The mushrooms double in size every day and you have to be on top of it or you’re A-grade crop turns into B-grade crop,” says Fletcher.

Each tray of compost yields about three crops. “You pick a room three times, and then you dump it,” says Fletcher. In another nod to Ostrom’s recycling efforts, the spent compost is then sold to Great Western Supply, a local soil company that uses it as a soil amendment.

Now you know how Ostrom’s grows 250,000 pounds of mushrooms a week. But did you also know that mushrooms are a smart nutritional choice?

“Mushrooms have all this nutrition a lot of people aren’t aware of,” says Fletcher. “Lots of B vitamins and antioxidants.” A portabella mushroom has as much potassium as a small banana.

Ostrom’s has recently begun enhancing some of its products. “Mushrooms are a natural source of vitamin D, but we can increase that so that you get 100 percent of your daily value in a three-ounce serving size,” says Fletcher.

To do that, Ostrom’s simply exposes the mushroom to UV light for a scant nine seconds. “The mushroom converts the light. We don’t add anything,” says Fletcher. “Mushrooms grow in the dark. Why would they even react to sunlight? But they do. It’s pretty cool, actually.”

Mushrooms – a fungi, not a vegetable – also bridge the benefits of animal protein and plants in a uniquely nutritional way.

“The prevailing comment I always get is, ‘I knew they weren’t bad, like iceberg lettuce, but I thought they were just a fill,’” says Street. “No, mushrooms are basically at super-food level, nutrition-wise.”

Ostrom’s fastest growing category of mushrooms sold is its brown mushrooms, the crimini and portabellas.

“The portabella sort of started that, when people started realizing how meaty they were,” says Fletcher. “The portabella and the crimini mushroom are the same, it just takes maybe five days more to grow the portabellas.”

Mushrooms have umami, which is that savory fifth taste sense in your mouth – with salty, bitter, sweet, and sour. “It gives a savory, brothy mouth feel,” Fletcher explains. “It is a feeling of satisfaction.”

The other thing that makes Ostrom’s different from a lot of other mushroom producers is that they strive to be on the cutting edge of packaging innovation.

“We were the first in the entire country to come out with a paper till that’s recyclable and sustainable. We’ve been doing this about three years,” Fletcher says of the colorful trays that hold the mushrooms. “Especially in the Pacific Northwest, people are interested in sustainability, buying local and lowering their carbon footprint so we are working as hard as we can to meet those demands.”

At the end of my tour, Fletcher lets me pluck a white button mushroom from a tray in one of the growing rooms. I remove the stem and pop it in my mouth. Sublime. And in just a day or two’s time, the neighboring mushrooms in that tray will be in local grocery stores, complete with added Vitamin D and recyclable packaging, ready for you to enjoy, as well.