Playing Belle in Beauty and the Beast is a dream come true for River Ridge student Olivia Maassen.  “The best part of playing Belle is I have the opportunity to be a Disney princess for a day, several weeks of performances actually,” she says.  In addition to the stage performances, Masseen will participate during “Tea with Belle” on May 5 at 1 p.m.  Young princesses and princes are invited to dress up and join Belle for punch and cookies, kid friendly activities and other entertainment. There will be photo opportunities with all of the characters.  Admission for this special event is $5 person.

Maassen, a junior, was recently elected as one of five student members of the Washington State Thespian Board.  By virtue of her placement in the monologue category at state competition, she will also represent her school at the National Thespian Conference this June in Lincoln, Nebraska.  Additionally, the River Ridge theater department was recognized by the Educational Theater Association as one of two national Outstanding High School Theater Departments for 2011-2012.  They are the only Washington state school to have received this award since its inception in 1992.  Beauty and the Beast is directed by River Ridge Arts Facilitator Leslie VanLeishout.

At Timberline, students and staff members are joining forces to present Chicago, a musical that satirizes corruption in the criminal justice system and the concept of the celebrity criminal. While many are familiar with the 2002 Academy Award Winning movie adaptation, the show was first produced on Broadway in 1975.  A hugely successful revival was mounted in 1996 and is still running on Broadway. The story revolves around Roxie Hart, a 1920s era chorus girl who dreams of being in Vaudeville.  After murdering her lover, she winds up on death row and meets Velma Kelly and learns what it really takes to be a star.  The show is directed by Brenda Amburgy with musical direction by Terry Shaw and choreography by Gwen Haw. 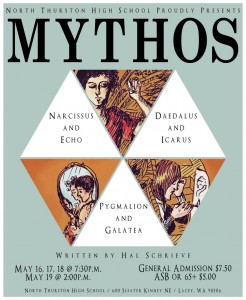 “Over the course of several months I created at least three drafts of each play and scrapped entire scripts twice,” says Schrieve, who took on task after being encouraged by Deneen.  “I was excited to have the opportunity to work on such a brilliant project, and though some of my original ideas weren’t quite appropriate for the venue, I feel like the final drafts reflect issues that most people face at some point, and contain fairly meaningful themes (that is, suicide, stereotyping, negotiating the parent-child divide), despite being written by a teenager. It was difficult to balance schoolwork and writing, but I am pleased that I managed to turn out a product in time for the show to start.”

Beauty and the Beast opens this weekend with shows on May 4-5 and 10-12.  Curtain is at 7:30 p.m. each evening at the school, 350 River Ridge Drive, SE in Lacey.  Tickets are available at the door and are $10 general admission or $7 for students and seniors.  May 10th will be a sing-a-long performance.

Chicago will run May 10-12 and 17-19 at Timberline High School, 6120 Mullen Road SE in Lacey.  Curtain is at 7:30 or 1 p.m. on Saturday the 19th.  Tickets are available online at www.seatyourself.biz/timberline or at the door for $10 general admission or $8 students and seniors.

Mythos runs May 16-18 at 7:30 p.m. and May 19 at 2 p.m.  Tickets are available at the door for $7.50 general admission or $5.00 for students with an ASB card and seniors.  The show will be performed at the Koval Center for the Performing Arts at North Thurston High School, 600 Sleater Kinney NE, Lacey.